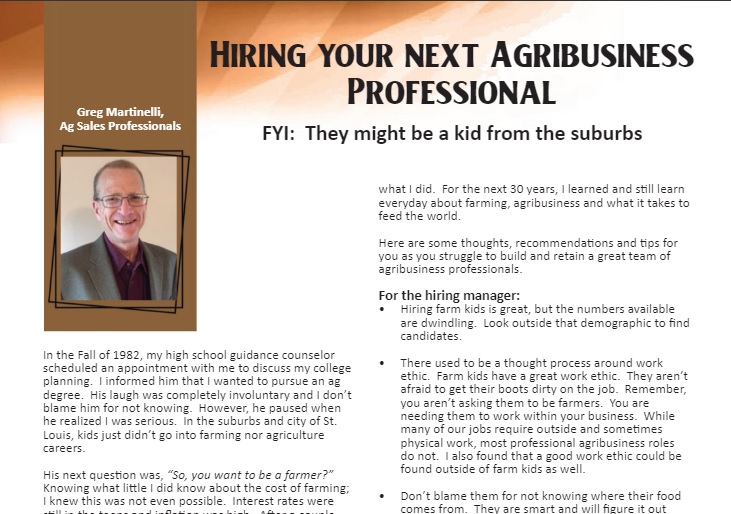 FYI: It might be a kid from the suburbs

In the Fall of 1982, my high school guidance counselor scheduled an appointment with me to discuss my college planning.  I informed him that I wanted to pursue an Ag degree.  His laugh was completely involuntary and I don’t blame him for not knowing.  However, he paused when he realized I was serious.  In the suburbs and city of St. Louis, kids just didn’t go into farming or agriculture careers.

His next question was, “So, you want to be a farmer?”  Knowing what little I did know about the cost of farming; I knew this was not even possible.  Interest rates were still in the teens and inflation was high.  After a couple of weeks of researching, he told me the only options he found were either being a farmer or being a county agent.  And county agent pay was fairly low.

I share this story as it illustrates the difficulty of hiring non-farm kids in our industry.  We know the number of farmers is dwindling. At last count, I believe the number was less than 1% of our population.  That means the number of farm kids is dwindling.  Your hiring pool is slowly draining.  To add difficulty to this scenario, it’s estimated that 200,000 agribusiness professionals retire every year.  While the colleges are only graduating around 30,000 per year.

After graduating from The University of Missouri, I spent five years in the Army and lost almost any connection to the Ag world.  During interviews, I heard the same response from most companies.  “We really like your leadership skills, but you have no Ag background.  We want to hire you but just don’t know where to put you.”  These felt like strange compliments.  One very forward-thinking company had a program that was a perfect fit.  Their offer came quickly and without a lot of discussion on my background.  A business manager training program required a lot of leadership skills, while the farming knowledge could be learned along the way.  And that’s what I did.  For the next 30 years, I learned and still learn every day about farming, agribusiness, and what it takes to feed the world.

Here are some thoughts, recommendations, and tips for you as you struggle to build and retain a great team of agribusiness professionals.

For the hiring manager:

For the Hiring Candidate:

Realizing and understanding all of this is the first step toward building your team.  The next step is letting candidates know about it.  Please don’t misunderstand, I think we still need to recruit heavily at the agribusiness schools.  They are great and have great candidates graduating from them.  The struggle is sheer numbers.  There’s not enough of them.  So, how do we let the world know about our industry?

What does an agribusiness do right now, this month to begin recruiting outside of Ag?

Finding, building, and retaining a talented team of agribusiness professionals has never been as difficult as it is now.  While HR leads the process and administration of hiring candidates, it really needs to be an ongoing strategy for everyone to continuously look for good people to join the company.

If this blog helped you on your journey to being more effective in your selling, I ask you to share it with those who might also benefit from it.

Sign up for my weekly blog and podcast using the links on this page.

As a final request, take a look at the newest book on the market written specifically for you! 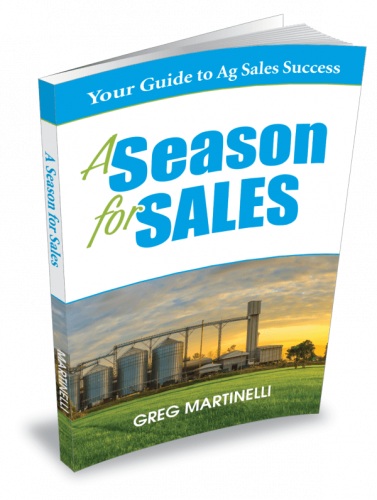 Check out my book, A Season for Sales, written for specifically for the Ag Sales Professional, by an Ag Sale Professional!
Buy the Book

How do I get my sales team to use CRM?