5 Ways Comedians teach us to Sell

5 Ways comedians teach us to sell

Comedian Rodney Dangerfield used to say, “I tell ya, I get no respect.  No respect at all!”  And it seems true for all comedians.  Because they act or say silly things that make us laugh, we think they are not serious about their profession.  Nothing could be further from the truth.  They are some of the most dedicated and hardworking individuals in the entertainment business.

Driving as much as I do, I get a chance to listen to a lot of audio books.  Comedian biographies or autobiographies being some of my favorites:  Jerry Seinfeld, Gilda Radner, Gene Wilder, Amy Poeler, Billy Crystal, Robin Williams, Tina Fey, Steve Martin, Bob Newhart, Mindy Kaling, Amy Schumer, George Carlin, and even Bill Cosby (before prison).  While you might not like their humor, listening to their journey from unknown to worldwide fame is a great lesson in sales and brand building.

The struggle we have is that when we hear them making jokes about people, we disregard them because it sounds random, impromptu, and silly.  Again, nothing could be further from the truth.  TV and film actors have hundreds of takes to get their lines delivered.  Even then, the sound person can edit for needed corrections.  Contrast that to a comedian on stage, 5 feet from one of the toughest audiences in the world, an intoxicated comedy club.

Here are just a few lessons we can learn from comedians:

4. Branding…find their own unique niche… What would happen if Larry the Cable Guy came out and tried to be Steve Martin? Bomb!  What if Ray Romano tried to be Eddie Murphy?  Bigger Bomb!  What if Jerry tried to be Robin or even more physical like Chris Farley? The worst bomb!  So, goes you.  If you are in your early years, you may not have this figured out yet.  The same went for these comedians.  They were trying to find themselves and their humor.  Their brand strength wasn’t there yet.  However, it was developing.  Dan Whitney was doing a call in to a radio show as Larry the Cable Guy.  As it gained in popularity, his brand was formed.  From there, he simply became known as, Larry the Cable Guy.  What are you doing today that will build your personal brand?  Remember, you are going to ask your customer to pay you more money to work with your brand than your competitor.  So, whatever brand you are building, it has to be better than your competition.

5.  For the best, it’s all about the laughs, not the money: When they go into comedy, the odds are stacked astronomically against them.  The money can’t be the motivator as it is just too unlikely.  I’m not saying they don’t enjoy or want the money, but the need that they have is for the laugh, the live crowd interaction and acceptance.  If not, they would have quit in their early years.  Eating ramen noodles every night and living in your parent’s basement would have killed the desire for money.  Same goes for sales.  If you are in it for the money, but dislike everything about it, seek other employment.  You will not be happy.  It will show through that you are miserable.  The process of developing your brand and growing your sales will eat you up from the inside.  Sales is helping your customers get the most out of your products for their investment.  You have to do this even while your customer is trying to not buy from you, avoid you, or maybe even lie to you.  If you don’t truly enjoy it, there are much easier ways to make money.

As you sit down tonight to watch the next guest on Jimmy Fallon or Jimmy Kimmel, give some thought to how much effort went into that stand-up comic that comes out from behind the curtain.  Think about how similar this is to turning the steering wheel and driving onto a farm or into a parking lot of your agribusiness prospect.

If this article helped you on your journey to being more effective in your selling, I ask you to share it with those who might also benefit from it.

Sign up for my weekly blog and podcast using the links in this email.

As a final request, take a look at the newest book on the market written specifically for you!

A Season for Sales:  Your Guide to Ag Sales Success How are Producers making decisions for 2023?

10 Takeaways from the J.L. Farmakis Inc. 2022 Farmer Speaks Survey I am always looking for ways to understand customer decision-making processes.  This information is 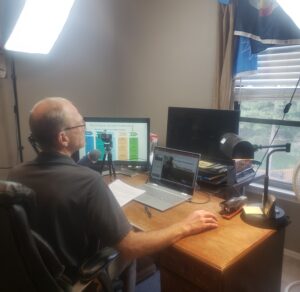 Sales Innovation Borrowing from everywhere to improve your selling skills Innovation is not typically associated with the sales team.  We are most often depicted as 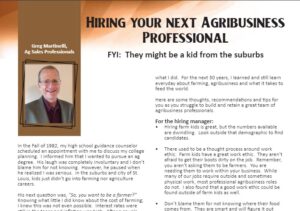 FYI: It might be a kid from the suburbs Originally published in the Wisconsin Agribusiness Assoc Quarterly:  https://issuu.com/joanviney/docs/22_summerlo/30 In the Fall of 1982, my high

How are Producers making decisions for 2023?